The Burney Sisters, comprised of sisters Olivia-16, Emma-14, and recently joined 11-year-old sister Bella , create music with a maturity and emotional intelligence that belies their age. Olivia and Emma write keen and knowing songs while arranging for multiple instruments and structuring unique and resonant harmonies. The result—personal and penetrating music that both connects with and captivates the listener. Their soul nurturing sibling harmonies and tunes are reminiscent of The Avett Brothers, First Aid Kit, Indigo Girls, The Staves, and The Wild Reeds. 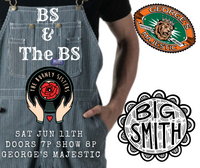 Big Smith and The Burney Sisters at George's Majestic 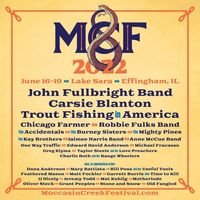 Moccasin Creek Festival is an annual 4-day music festival, which typically celebrates other arts and crafts as well. It takes place at beautiful Lake Sara in Summit Township, just west of Effingham, Illinois. The lake was created in the 1950's from five creeks that run through the basin. One of those creeks was named Moccasin Creek by a surveyor named Tipsword in the 1850's, because of moccasin tracks he found on the banks.

The founder of Moccasin Creek Festival is Bill (Poss) Passalacqua, an Effingham native who has built his life around writing, performing and promoting music. The Passalacqua family has a rich musical history, and Bill has three brothers, all of whom are musicians. Each of them have followed in father Larry's musical footsteps. Folk, bluegrass, alternative country, roots rock, and blues - "Americana" music. This is what MCF is all about - in an outdoor setting, using a venue with great acoustics, at a beautiful time of year.

Food and beverages sold on site. Kids activities. Camping is next door to the festival venue, as well as cabins for rent.

Check out our merch store!