Flor De Toloache, Maria the Mexican, and The Burney Sisters at Knuckleheads Garage

Having performed at Coachella and aNPR Tiny Desk Concert, this Latin GRAMMY-winning, New York-based ensemble is one of the finest all-female mariachi groups on the planet. The group began as a trio named for the delirium-inducing Mexican flower used as a love potion for generations. As it has grown in notoriety, the band has expanded to as many as ten members depending on the setting, forming a truly global ensemble with musicians hailing from Mexico, Puerto Rico, Dominican Republic, Cuba, Australia, Colombia, Germany, Italy, and the UnitedStates. Their highly anticipated new album "Indestructible", produced by 11-time Grammy-winner Rafa Sardina (Stevie Wonder, Lady Gaga, Rodrigo y Gabriela, among others), premiered via NPR First Listen, where NPR's Marisa Arbona-Ruiz said: "Flor de Toloache's new bilingual album Indestructible pushes the boundaries of mariachi music and its instruments through reimagined pop covers, originals and original collaborations.”INDESTRUCTIBLE follows Flor de Toloache's critically acclaimed and Latin Grammy Award winning sophomore release, 2017's Las Caras Lindas and features a number of notable collaborations, including the all-female new flamenco quartet Las Migas, critically acclaimed and multi-platinum singer-songwriter John Legend, Latin Grammy/Juno winner singer-songwriter Alex Cuba, true R&B star Miguel and accordion virtuoso Josh Baca from Los Texmaniacs.Announced as one of the official selection of WOMEX 2019, the world's biggest showcase for world music, Flor de Toloache performed over 100 shows in 2019, touring Japan for the first time!The New York ensemble and beloved press-darlings were also invited in 2019 to perform as special guests for the Grammy Museum's inaugural Latin Music Gallery Exhibition ribbon-cutting ceremony also paying a special homage to Linda Ronstadt with a magical mariachi presentation at the 42nd Annual KENNEDY CENTER HONORS. https://mariachinyc.com/ Maria The Mexican For MARIA THE MEXICAN principal Maria Elena Cuevas it’s not about her…then again, it is. The band is actually named for Maria and sister Teresa (Tess) Cuevas’ grandmother, Maria Teresa Alonzo Cuevas, a pioneer in Mariachi who in the 70s founded Mariachi Estrella, one of the first all-female Mariachi bands in the US. The band eventually performed for more than 30 years but tragedy struck Mariachi Estrella in 1981 when seven members were killed in the Hyatt Skywalk collapse in Kansas City.

Following the accident and grandmother Maria’s recovery the band resumed performing and in the late 90s granddaughters Maria and Tess, who learned Mariachi and other traditional Mexican music from their grandmother, performed with her in Mariachi Estrella as youngsters – Maria singing and playing guitar and vihuela, Tess singing and playing violin. Perhaps the most important musical legacy of Mariachi Estrella’s final years after the Hyatt tragedy was the indelible imprint placed on the Cuevas sisters by the experience of performing traditional Mexican music with their grandmother.

“My grandmother taught a lot of people about this music – other family members, university students, certainly my sister and myself, but there is a whole universe of people who were so generously and positively influenced by her.” -MARIA CUEVAS Now for the “then again, it is” part. Today Maria Cuevas is lead vocalist and guitarist playing acoustic, electric and traditional Mexican stringed instruments for MARIA THE MEXICAN - a Mexicana/Americana/indie blues rock/funk/soul fusion - a true hybrid of Mexican folklore and rock ’n roll delivered in both English and Spanish. Founded by Maria, sister Tess (vocals and violin) and guitarist / songwriter D. Garrett Nordstrom (a veteran of the KC/Midwest club scene with 3 releases by the alt-R&B group The Garrett Nordstrom Situation) MTM is at work on a new release to follow up “Moon Colored Jade” (2013) and “South of the Border Moonlight” (2016) with plans to tour after the new album’s release (TBD DUE TO COVID).

On stage there is an amalgam of traditional Mexican and American rock instrumentation – drums, bass, electric guitars, acoustic guitars, traditional Mexican stringed instruments, pedal steel guitar, congas and percussion, trumpet, keyboards. And a passionate delivery of American roots music forms dosed with traditional Mexican harmonic and rhythmic influences alongside traditional Mexican music – Mariachi, Cumbia and more. The repertoire comes to life with original music – from incendiary love songs to social and political commentary – written and arranged in collaborations between Maria and Garrett Nordstrom and penned in both English and Spanish. https://www.mariathemexican.com/ The Burney Sisters, comprised of sisters Olivia -17, Emma-14, and recently joined 12-year-old sister Bella, create music with a maturity and emotional intelligence that belies their age. Olivia and Emma write keen and knowing songs while arranging for multiple instruments and structuring unique and resonant harmonies. The result-personal and penetrating music that both connects with and captivates their listener. Their soul nurturing sibling harmonies and tunes are reminiscent of The Avett Brothers, First Aid Kit, Indigo Girls, The Staves, and Joseph. https://theburneysisters.com/

The Burney Sisters @ Off Broadway

The Burney Sisters at The Smiths/Morganton, NC

This a private event that is open to a few fans/guest of The Burney Sisters in the area in addition to the host’s guest. Please contact Beverly Allen or Tonja Carswell Smith, Tonja.fineart@gmail.com or on messenger) to reserve your spot or leave your email here for one of the coordinators to contact you. National touring artists, The Burney Sisters are on a Southeast Tour and they are entertaining guests at The Smiths. Doors at 6:00pm, music at 7p. Bring a beverage and snack if you feel compelled. There will be some seating available, but bring a folding chair just in case. As they are traveling artists, we want to make sure they are covered in gas and essentials, so a suggested donation of $10 per person is requested. Bring a few extra dollars in case you LOVE what you hear and want to tip for a job well done or purchase some of their lovely merchandise. Its going to be an awesome night! Can't wait to see everybody. 🙂 Click on the following links to learn more about the trio: Website: https://www.theburneysisters.com Facebook: https://www.facebook.com/theburneysisters Instagram: https://www.instagram.com/theburneysisters Youtube: https://www.youtube.com/theburneysisters Event: Live House Concert featuring the amazing trio from Columbia, MO. Bio: The Burney Sisters, comprised of sisters, Olivia, Emma, and Bella create music with a maturity and emotional intelligence that belies their age. Olivia and Emma write keen and knowing songs while arranging for multiple instruments and structuring unique and resonate harmonies. The result: personal and penetrating music that both connects and captivates the listener. Their soul nurturing sibling harmonies and tunes are reminiscent of The Avett Brothers, First Aid Kit, Indigo Girls, The Staves, and Joseph. *Suggested Donations $20/Adult & $10/Children (Children under 7 Free) BYO Chairs, snacks, and drinks

The Burney Sisters at The Blackford’s

Event: Live House Concert featuring the amazing trio from Columbia, MO. Bio: The Burney Sisters, comprised of sisters, Olivia, Emma, and Bella create music with a maturity and emotional intelligence that belies their age. Olivia and Emma write keen and knowing songs while arranging for multiple instruments and structuring unique and resonate harmonies. The result: personal and penetrating music that both connects and captivates the listener. Their soul nurturing sibling harmonies and tunes are reminiscent of The Avett Brothers, First Aid Kit, Indigo Girls, The Staves, and Joseph. *Suggested Donations $20/Adult & $10/Children (Children under 7 Free) BYO Chairs, snacks, and drinks

The Burney Sisters at Doodad Farms

We're always looking for unique performers for our stage, so when we received word that Missouri-based band, the Burney Sisters, were going to be in NC, we reached out to them and offered them a spot. They graciously accepted, and we're thrilled to be able to present these incredible musicians at Doodad Farm. The way this band is growing in popularity, we see this event as one of those I-saw-them-when shows!

THE BURNEY SISTERS, comprised of sisters Olivia -17, Emma-14, and recently joined 12-year-old sister Bella, create music with a maturity and emotional intelligence that belies their age. Olivia and Emma write keen and knowing songs while arranging for multiple instruments and structuring unique and resonant harmonies. The result-personal and penetrating music that both connects with and captivates their listener. Their soul nurturing sibling harmonies and tunes are reminiscent of The Avett Brothers, First Aid Kit, Indigo Girls, The Staves, and Joseph. “The things that I've really noticed, and it's not even necessarily their age, which is astounding to begin with — I think that they, in this song that we just recorded, show a lot of maturity in songwriting” -- Madi Skahill, Columbia Missourian “The Burney Sisters... Have the talent and wisdom of artists three times their ages. They have already opened for Wynonna Judd, and played high profile music festivals.” -- Bobby Jean Sawyer, Wide Open Country More at www.theburneysisters.com

We've been after CARRIE MORGAN,one of the region's finest singer-songwriters, all year, and we finally managed to bring her in to open this show. Carrie's roots show up in her music -- her clear alto is captivating, her picking weaves images of cypress trees and beach skies, and a touch of the blues gives her music a sly edge. She lives and sings in Greensboro, almost exclusively for her three-year-old son Leo, who is already much more famous. More at https://www.carriemorganmusic.com/

HOW TO JOIN US You never need a ticket or a reservation to attend one of our concerts - just show up. If we had a gate, it would open at 2pm. Feel free to show up earlier than that, even, if you just want to enjoy the weather, have a picnic, or just hang out (though we may ask you to help set up!). The show will start at 3pm. Doodad Farm never charges for entry to concerts, though we do request that those who are able (and you know who you are) donate at the stage area. Every penny of donations goes straight to the performers. We think $10-$15 is a reasonable donation for this show. As always, we ask that you surprise yourself with your own generosity to support our performers, keeping in mind that the last couple of years have been particularly difficult for musicians. Other details: • Kids, dogs, and all your friends are always welcome. • Please bring CASH for your donation to the performers and for merch purchases. • This is an outside, farm like setting (thus the name). Dress like you’re going camping and you’ll be fine. • We never allow weapons of any sort at the farm. If you think you need to protect yourself, you’re in the wrong place. • Bring your own beverages, and consume them responsibly. Of course snacks and picnics are welcome. • If you’re a sitter, bring a chair. We have some extras if you forget. • Smoking is permitted as long as you don’t bother anyone or do any butt-dropping. • Please clean up after yourself and treat the Farm as if it’s your own (in a way, it is!). • A portable toilet and drinking water will be available. • Let someone help you park, especially if the field is wet. Doodad Farm is at 4701 Land Road, Greensboro, NC 27406 See less

The Burney Sisters House Concert at the Steinberg/Wagner’s

The Steinberg/Wagner household welcomes you to their listening house concert to discover the Americana/Folk Indie music of national touring artists, The Burney Sisters, hailing from Columbia, MO. Since the artists are traveling, we are asking a suggested donation of $10-$20 per person. Please layer up and bring blankets and warm items, as well as, folding chairs to be comfortable. If you'd like to bring a snack or drinks to share that's great or just BYO. We want everyone to thoroughly enjoy the even kind. We're looking forward to seeing everyone and welcoming in this incredible trio of artists!!! Please reach our to host Jody Steinberg via email to confirm your attendance. jody@jodysteinberg.com

The Burney Sisters @ The Blue Note

Little Grassy Get Down 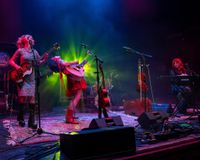 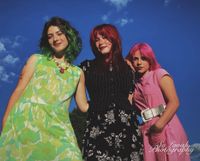